Why are Irish children the most worried in Europe about school prospects?

International Conference on School Bullying: recommendations by the Scientific Committee on preventing and addressing school bullying and cyberbullying

International day against violence and bullying at school including cyberbullying

4th of November 2021: International Day against Violence and Bullying at School including Cyberbullying

Analysis: Irish children are more concerned about poor school grades due to Covid-19 than kids in any other European country

Children in Ireland are very concerned about the impact of Covid-19 on their educational success during the lockdown. 43% of them said they worried they’d get poor grades because of online activities during the lockdown, the highest percentage among the European countries studied in a new report.

Most children across the surveyed European countries took part in online activities during the lockdown, but Ireland leads with the number of children who say they did not, with as many as 11% (compare this to less than 1% of such children in Italy, which reports the lowest rates on this measure). Children in Ireland were using a variety of digital technologies for school purposes. Just under half (44%) used messenger apps for school purposes, just under a third (30%) used social media and over 74% used video chat or conferencing tools like Teams and Zoom.

Over half of the surveyed children in Ireland said they had less school-work than before the lockdown. They spent 3.2 hours using digital technologies for school purposes, which is the lowest number among the surveyed countries (the highest was in Portugal with 4.4 hours). Irish children spent a total of 6.7 hours on the internet or using digital technologies during a typical weekday during lockdown. 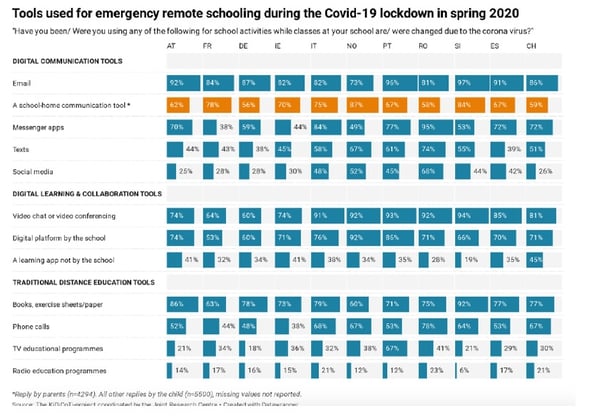 The project was coordinated by the Joint Research Centre (JRC) of the European Commission and based on a survey in 11 European countries, including Ireland (where it was undertaken by the National Anti-Bullying Research and Resource Centre), with children aged 10 to 18 and one of their parents or guardians. The focus of the study was on the use of the Internet and digital technology during the lockdown, including for school purposes, as well as the online risks such as cyberbullying and exposure to harmful online content, and benefits associated with digital media use that children and families experienced.

The study also examined how frequently children experienced a variety of risks. Cyberbullying is a significant problem for children. It can include mean messages, gossip and exclusion on various platforms, from social media such as Instagram or TikTok, to direct messaging apps like WhatsApp, and a number of gaming platforms, among others. 28% of 10 to 18-year-old children in Ireland have reported cyberbullying victimization during the lockdown, which is an increase when compared to victimization rates found in previous research in Ireland (13.7% for primary and 9.6% for post-primary students).

From RTÉ Radio 1’s Drivetime, Dr Tijana Milosevic discusses the new report that has found one-third of children aged between 10 and 18 years old reported being cyber bullied during lockdown.

Nonetheless, children and parents report a number of positive experiences related to digital technology use while staying at home, including confidence in their digital skills and social connection thanks to technology. Almost two-thirds of parents (61%) said digital technology helped their family be more creative during the lockdown and 86% agree that it helped maintain contacts with friends and family, with under a half (41%) experiencing fatigue from overuse of digital technology. With fear of misinformation on the rise, it is important to note that as many as 84% of parents and 49% of children say they know how to find health information online that they can trust.

Overall, while we certainly need to pay attention to risks that children experience online, it is also important to remember that a certain degree of exposure to risk can lead to building resilience. Understanding one’s child’s needs and keeping abreast with online safety advice might be a good place to start.